What about Holy Saturday?  What Should We Do? 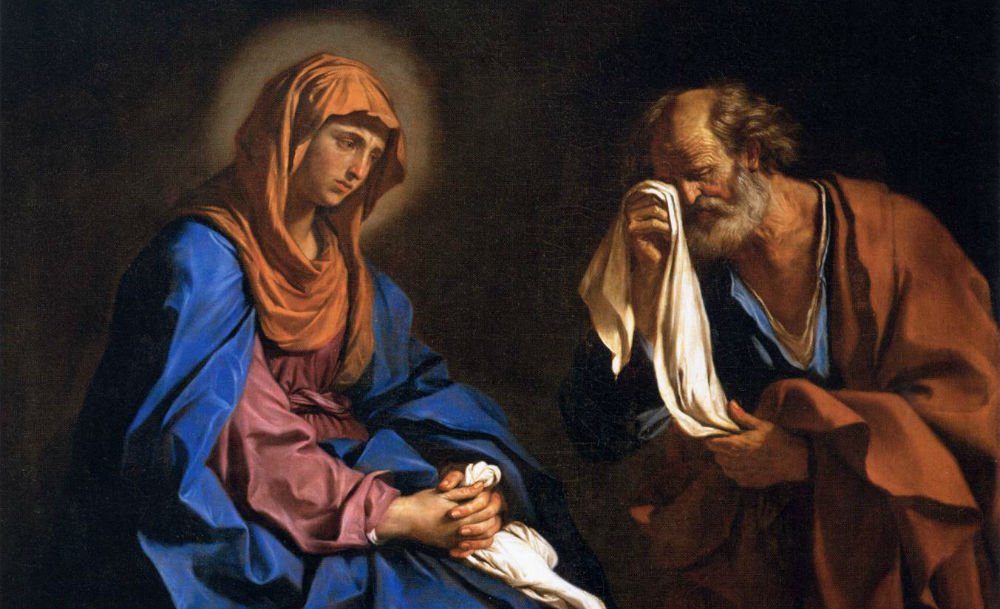 Matthew wrote that Joseph of Arimathea “rolled a large stone against the entrance of the tomb and went away. Matthew then wrote that “Mary Magdalene was there, and the other Mary, sitting opposite the tomb” when he left (Matt. 27.60-61).

On Holy Saturday take some time and find a place and imagine yourself sitting and waiting at the Lord’s tomb” and meditate and contemplate the life and teachings of the Great Savior and Teacher.

I believe that the first Christians contemplated the life and teachings of Jesus during the time between the crucifixion and the resurrection because most, if not all, of us would likely have done the same. After experiencing a deep sense of loss over the death of a loved one, we tend to keep that person alive by thinking about, and reflecting upon, the person and also share precious stories about the person with others.

So, while sitting opposite the tomb, it was likely that Mary Magdalene and the other Mary thought about, and reflected upon, their times with Jesus and meditated and contemplated upon his great teachings.

Luke wrote that at some point “they went home and prepared spices and perfumes” and they rested on the Sabbath in obedience to the commandment. Luke also wrote that “On the first day of the week, very early in the morning, the women took the spices they had prepared and went to the tomb. “They found the stone rolled away from the tomb” because the resurrection had taken place (Luke 23.55 and 24.1).

I also believe that Mary Magdalene and the other Mary shared precious stories about Jesus with other first Christians after they left the tomb and before they came back to the tomb at the time that we now call Easter morning.

I cannot help but think how they recalled and shared the life and teachings of Christ during the time we now call Holy Saturday. They probably shared over and over the times that they spent with Christ.

The Gospels mention the many towns and villages that Christ visited and we are told that many of the first disciples were with him. The scriptures note that he stopped or stayed in the villages around Caesarea (Mk 8.27) and the villages and towns that bordered between Samaria and Galilee (Lk 17.11). He often went to the public spaces and places within these towns and villages that included marketplaces, synagogues, temple courts, and wells. He often went to the private homes of family, friends, and acquaintances as well. At these various public and private places Jesus celebrated feasts, attended weddings, and ate meals. Other nearby places that he visited were described in topographical terms such as a mountainside, hill, shore of a sea, lake or river, and valley. At these natural sites he often interacted with crowds (Matt 5.1; Mk 2.13). At times he sought a place within these locations just to be with his disciples, and at times to be with himself (Mk 1.35; Mk 5.46).

I cannot help but conclude that the first Christians talked, and perhaps even chuckled, about what happened at these villages and towns and during the feasts and weddings. I can imagine them telling the story about feeding the 5,000 (Mathew 14.13-21). How Jesus wanted to find a place to be alone, but the crowds kept following him and how, as evening approached, some of the first Christians “came to him and said, “This is a remote place, and it’s already getting late. Send the crowds away, so they can go to the villages and buy themselves some food.”

How Jesus said “They do not need to go away” and “give them something to eat” and how they responded by saying “We have here only five loaves of bread and two fish” and then Jesus said “Bring them here to me.”

They may have inserted comments like “you won’t believe what happened next.” Jesus tells the crowd to sit on the grass, he “gave thanks and broke the loaves” and then gives them to us.

The first Christians may have inserted “so we started passing out the bread and fish and guess what? Everybody ate and was satisfied. We then picked up the remaining bread and fish and can you believe there were 12 basketfuls of broken pieces left over and the number of persons who ate was more than 5,000.

As they reminisced, I am sure there were very serious and emotional moments for the gospels are filled with examples of Christ being compassionate and forgiving towards others. There are several examples of him teaching the Good News publicly while walking, standing, and sitting near lakes, seas, and rivers. There are an equal number of examples of Jesus doing the same privately inside the homes of friends and local leaders and among the crowds that filled the synagogues and courtyards. While going from town to village there are also many examples of his teaching being accompanied by many acts of healing. Most were physical healings and others were spiritual healings as well as psychological.

As they reminisced, they likely recalled the encounters with undesirable people, places, and times according to the views of some local leaders. While eating dinner at a friend’s home with his disciples, Jesus ate with “tax collectors and sinners” which Pharisees proclaimed was against their laws (Mark 2.15). One time even his own disciples were questioning why he was talking to a woman at a well, who also was a Samaritan, in a city of Samaria for which Jews were to have no “dealings with (John 4. 9, 27).” The Pharisees also proclaimed that Jesus and his disciples did unlawful things on the Sabbath such as gathering grain to eat (Luke 6.1) or healing a sick person (John 5.10).

Holy Saturday is a unique time because, as previously noted, it is that day between the crucifixion and the resurrection and provides an opportunity to imagine ourselves sitting and waiting at the Lord’s tomb and meditating and contemplating the life and teachings of Christ.

Since the earliest days of the Christian Church, Lent has been associated with the 40 days that Christ spent in the desert before the beginning of his public ministry (Luke 4.14). By observing the forty days of Lent, one can imitate Jesus’ withdrawal into the wilderness for forty days and can also prepare for public ministry.

Forty days after Ash Wednesday is this Saturday, Holy Saturday, March 26. If you have not imitated Jesus withdrawal into the wilderness to prepare for public ministry so far during Lent, consider doing so for the next few days before Good Friday which is a day to encourage reflection on the crucifixion.

Then on Holy Saturday, imagine yourself sitting and waiting at the Lord’s tomb. Take the time to mediate and contemplate about the live and teachings of Christ in the scriptures. Recall what you know and search the scriptures for events in the life of Christ and related teachings that you may not recall so well or even forgotten. Share what you know and learn with others during this day.

To further prepare for public ministry, consider reflecting upon people, places, and upcoming times that you may find undesirable or others may be telling you are undesirable. Such people, places, and upcoming times may include homeless persons standing on street corners, persons with mental health problems flailing their arms as they are talking to themselves while walking down the streets, or a previously battered or assaulted women sitting on a ledge not sure what to do or where to go next.

Other encounters may involve day laborers, recyclers, street vendors, and the seemingly unemployed. Such persons may be hanging around street corners, shifting through trash, and selling various foods or goods.

In light of what I just noted above, I would like to encourage you to reflect on the following passage of scripture between now and through Holy Saturday and on Easter Sunday, may you rise with the Risen Savior and serve God unlike ever before.

“Is not this the kind of fasting I have chosen:
to loose the chains of injustice
and untie the cords of the yoke,
to set the oppressed free
and break every yoke?
Is it not to share your food with the hungry
and to provide the poor wanderer with shelter—
when you see the naked, to clothe them,
and not to turn away from your own flesh and blood?
Then your light will break forth like the dawn,
and your healing will quickly appear;
then your righteousness will go before you,
and the glory of the Lord will be your rear guard.
Then you will call, and the Lord will answer;
you will cry for help,
and (the Lord) will say: Here am I.
“If you do away with the yoke of oppression,
with the pointing finger and malicious talk,
and if you spend yourselves in behalf of the hungry
and satisfy the needs of the oppressed,
then your light will rise in the darkness,
and your night will become like the noonday.
The Lord will guide you always;
(and) will satisfy your needs in a sun-scorched land
and will strengthen your frame.
You will be like a well-watered garden,
like a spring whose waters never fail.
Your people will rebuild the ancient ruins
and will raise up the age-old foundations;
you will be called Repairer of Broken Walls,
Restorer of Streets with Dwellings.
(Isaiah 58. 6-12)