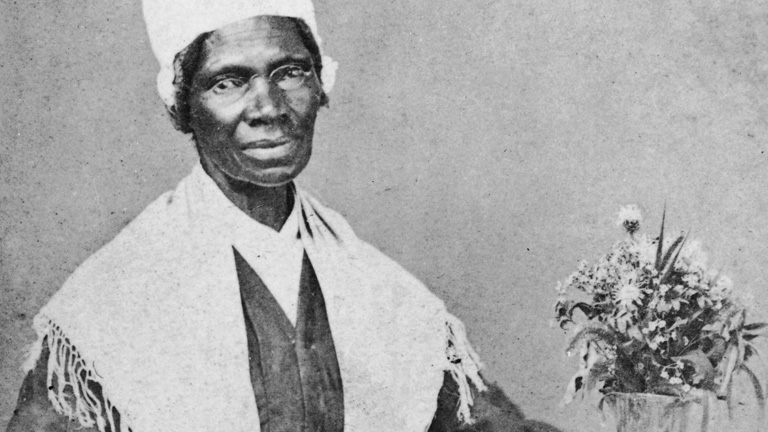 Sojourner Truth (c. 1797 – 1883) was an itinerant preacher, abolitionist, and women’s rights activist who was born into slavery as Isabella Baumfree. After being sold to four more owners, one fall morning at three o’clock she gathered a few articles of clothing and food and took her infant daughter, Sophia, and set off to freedom after experiencing numerous beatings and cruel events, including seeing her husband beaten savagely and dragged away, never to see him again.

As a free woman, she became one of the most powerful figures in the progressive movements that reshaped American society in the United States during the 19th century. After settling in New York City, she changed her name to Sojourner Truth and announced that she would travel as an itinerant preacher speaking out against injustices. She soon became a respected and commanding figure in several national social movements that focused on the abolition of slavery, women’s rights and suffrage, the rights of freedmen, ending child labor, and prison reform. During her travels she befriended many of the country’s leading reformers and abolitionists including WilliamLloyd Garrison, Frederick Douglas, Susan B. Anthony, and Harriet Beecher Stowe.

She carried a book with her that she called her Book of Life which contained the signatures and best wishes of many people she met on her journeys including those noted above. After a visit with President Abraham Lincoln, she pulled out her book and the President added the following inscription: “For Aunty Sojourner Truth, Oct 29, 1864, A. Lincoln.” The President had quipped earlier that he had heard of Sojourner long before she had heard of him.

Reforming America 1815 – 1860 by Joshua D. Rothman
This book explores several of the major reform movements during 1815 – 1860, the underlying motivations of the reformers who led these movements, and the ways these movements changed everyday life then and now.