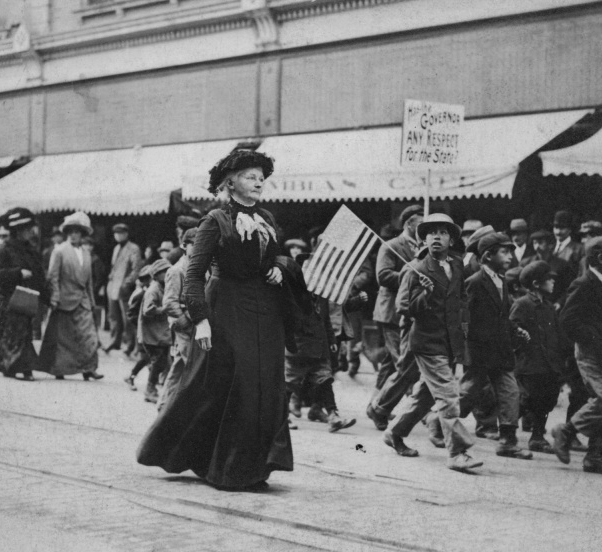 As a social reformer, Mary “Mother” Jones exposed disturbing truths about child and adult factory workers and miners and perpetual poverty in the United States through numerous marches, demonstrations, strikes, and speeches. The influence of Christianity was evident throughout her life. She received a Catholic education as a girl and became a teacher in a convent as a young adult. Letters and speeches by her, and those about her, were filled with the imagery of Christian beliefs.

She wailed about the unjust experiences of the poor akin to the Old Testament prophets while often dressed in old‐fashioned black dresses that seemed similar to the black habits worn by the Catholic sistersthat taught and mentored her during her early years. She was described by others as the “walking wrath of God,” the “incarnation of labor’s struggles,” and even introduced by the author Upton Sinclair one day as “Mother Mary.” The latter two descriptions easily conjured up the image of the New Testament Mary who gave birth to the Christ child for some.

Her use of the word “hell” is notable. Once she was introduced as a humanitarian and quickly bellowed “I’m not a humanitarian, I’m a hell‐raiser.”  Two noteworthy quotes that peppered her speeches on behalf of factory workers and miners were “fight like hell until you go to heaven” and “pray for the dead and fight like hell for the living.” These words, which were supported by rebellious actions, had others calling her “the most dangerous woman in America.”

As a passionate public speaker, what seemly appeared “unchristian‐like” was the use of name‐ calling, profanity, and dramatic stunts for effect such as parading children who lost body limbs as a result of accidents in factories and mines. Comparisons to John Brown, the abolitionist who believed armed rebellion was the only way to defeat the institution of slavery in the United States, highlighted her seemingly most “unchristian‐like” actions. When confronted with the issue of violence in the labor movement she encouraged it at times as a necessary evil. She believed that martyrs died to overcome injustices and the causes that she led were no exception.

Thus, when looking back at the life of Mary “Mother” Jones, the Christian imagery is hard not to see. She was in the Old Testament prophet tradition that decried injustice and called upon its perpetrators to account. She was also the Mother Mary interceding on behalf of poor and exploited adults and children.

Just a few months after her death, the singing cowboy Gene Autry recorded the song “The Death of Mother Jones.” The writer of the lyrics is unknown.

The world today is mourning
The death of Mother Jones
Grief and sorrow hover
Around the miners’ homes
That grand old champion of labor
Has gone to a better land
But the hard‐working miners
Miss her guiding hand
Through the hills and over the valleys
In every mining town
Mother Jones was ready to help them
She never let them down
In front with the striking miners
She always could be found
She fought for right and justice
She made a noble stand
With a spirit strong and fearless
She hated that which was wrong
And she never gave up fighting
Until her breath was gone
May the workers all get together
And carry out her plan
And bring back better conditions
For every laboring woman and man.

Mother Jones: The Most Dangerous Woman in America, by Elliott J. Gorn;

The Autobiography of Mother Jones, by Mary “Mother” Jones

For more information about Mary “Mother” Jones please click on the following web site for the Mother Jones Museum ‐ http://www.motherjonesmuseum.org.