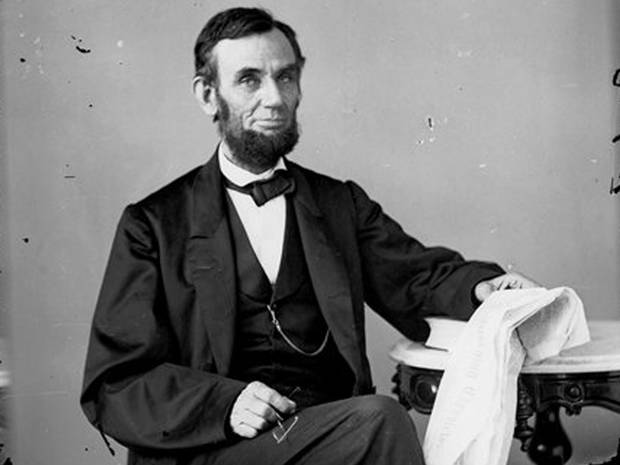 It was 150 years ago this week that the United States was overwhelmed with grief and sorrow upon hearing that President Abraham Lincoln was assassinated. On April 14, at 10:15 pm the assassin fired a shot and on April 15 at 7:22 am the President died. A manhunt immediately began and ended 12 days later on April 26 when the assassin was fatally shot after refusing to surrender to authorities.

On April 15, President Lincoln’s body was carried to the White House and was laid in state in the East Room which was open to the public for viewing on April 18. On the 19th, a funeral service was attended by large crowds and his body laid again in state on the 20th. On the 21st, a nine-car funeral train with his body left Washington and slowly made its way for 13-days through seven states to Springfield, Illinois as seven million people lined the railroad tracks as a way to deal with the tragic loss of a great social reformer.

Lincoln’s speeches underlined his support for several of these causes. They include his “Temperance Address” given to the Springfield Washington Temperance Society in 1842; “Eulogy on Henry Clay” delivered a week after Clay died in 1852; “House Divided Speech” of 1858 which was based upon the words of Christ found in the synoptic gospels and applied to his belief that “this government cannot endure, permanently half slave and half free;” “First Inaugural Address delivered in 1861 in Washington, D.C.; “Gettysburg Address” of 1863 which forever etched the following words into the hearts of minds of many U.S. residents—“Four score and seven years ago our fathers brought forth on this continent, a new nation, conceived in Liberty, and dedicated to the proposition that all men (and women) are created equal;” and his “Second Inaugural Address” delivered in 1864 upon his reelection as President by a landslide of votes.

Elton Trueblood, in his book entitled Abraham Lincoln: Lessons in Spiritual Leadership, wrote that “Central to the new spiritual development was an enlargement of the idea of vocation. Less and less did the President think that he was acting merely in his own will or depending upon his own meager resources.” Trueblood noted that “Lincoln grew immeasurably as he came to think of himself as an ‘instrument of God’s will.” He further wrote

“The sense that there really is a Guiding Hand, which makes possible a genuine calling for both individuals and nations, gave a tremendous new sense of moral strength. It was not enough to watch events and to muddle along day by day. What was much more important, Lincoln came to believe, was the effort to discern a pattern beneath the seeming irrationality of events. He had come really to believe that God molds history and that He employs erring mortals to effect His purpose.”

If President Lincoln would have written his own eulogy, his words may have echoed part of what he wrote and delivered as part of his “Farewell Address,” which was a touching tribute to his friends and neighbors for their past support. Right before he boarded his train in Springfield to start his inaugural journey to Washington, D.C. to begin his first term as the 16th President of the U.S, he looked at the huge crowd and stated

“My friends, no one, not in my situation, can appreciate my feeling of sadness at this parting. To this place, and the kindness of these people, I owe everything. Here I have lived a quarter of a century, and have passed from a young to an old man. Here my children have been born, and one is buried. I now leave, not knowing when, or whether ever, I may return, with a task before me greater than that which rested upon Washington. Without the assistance of the Divine Being who ever attended him, I cannot succeed. With that assistance I cannot fail. Trusting in Him who can go with me, and remain with you, and be everywhere for good, let us confidently hope that all will yet be well. To His care commending you, as I hope in your prayers you will commend me, I bid you an affectionate farewell.”

At the end of his speech, accounts from the media noted that there was loud applause and that people were moved to cheers and many shouted “we will pray for you.”  If President Lincoln could pray for us, his words may echo part of what he wrote and delivered as part of his “Second Inaugural Speech,” which he gave just a little more than a month before his assassination. This speech is one of the shortest inauguration addresses but considered one of the best inaugural addresses of all time and stands next to the “Gettysburg Address” as one of his greatest speeches. He ended his speech by stating “prayerfully”

“With malice toward none; with charity for all; with firmness in the right, as God gives us to see the right, let us strive on to finish the work we are in; to bind up the nation’s wounds; to care for him (or her) who shall have borne the battle, and for his widow and his orphan–to do all which may achieve and cherish a just, and lasting peace, among ourselves, and with all nations.”

Immediately upon President Lincoln’s death, everyone in the room knelt by the bedside and placed their hands on the bed as a minister asked God “to accept his humble servant into His glorious Kingdom.” Immediately afterwards, Secretary of War Edwin M. Stanton said, “Now he belongs to the ages.” One hundred and fifty years later, it seems that many portions of President Lincoln’s speeches also belong to the ages. Should not our prayers today also focus on binding up our nation’s wounds and to care for those who have borne battle and their families and to do all we can to achieve and cherish a just and lasting peace among ourselves and with all nations?